Porpoise calves carry more neurotoxic chemicals than their mothers, which detox themselves as they pass the poisons to their young while feeding, research reveals today.

Polychlorinated biphenyls (PCBs), manmade chemicals once used in electrical equipment, coatings and paints, were banned across Europe in 1987 because of their toxic effects on people and wildlife.

The 209 types of PCBs stay inside marine life, like dolphins, porpoises and whales, for different lengths of time, and some are more poisonous than others, said the study by Brunel University London and ZSL.

And the longest-lasting toxins stay in the mother until they are passed to their feeding babies – exposing them to dangerous doses of the pollutants, which are particularly toxic during brain development.

“It’s a tragic irony that juvenile porpoises are being exposed during feeding – when they’re supposed to get the vital nutrients they need for the crucial developmental stage,” said Brunel-based researcher Rosie Williams.

Scientists mostly monitor PCBs by grouping the different types together and treating them as one chemical, even though they have different toxicity levels. “It was a bit like trying to measure how much caffeine someone’s had – without knowing whether they drank three cans of Red Bull or three cups of tea,” explained Rosie.

This study, published in Science of the Total Environment, highlights the need to look at the individual chemicals to better understand the risk to marine wildlife, the researchers say.

“It’s obvious marine mammals are still experiencing the lingering impacts of PCBs,” said Rosie, whose study looked at porpoises found stranded or beached around the UK. “So identifying the sources and pathways by which they enter our oceans is a vital next step to preventing further pollution.” 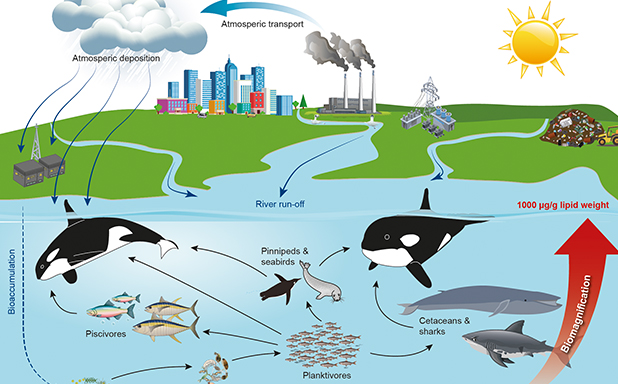 As top predators, orcas, or killer whales are exposed to some of the highest levels of PCBs, because there is an accumulative effect of PCBs as you go up the food chain.

Wildlife are exposed to different cocktails of PCBs depending on where they are found stranded, the study found – with higher amounts in the areas the chemicals were historically produced, such as the west coast of England. The differences could show PCBs are transported by wind and rain, from where they were produced, to higher areas with lower concentrations. Strong evidence suggests PCBs have reached the Arctic because of long-haul transport from industrialised Europe.

“This research helps further our understanding of these legacy industrial chemical pollutants and the effects that different levels of exposure, in complex mixtures, may have,” said co-author Professor Susan Jobling, at Brunel’s Institute of Environment, Health and Societies. “Learning more about PCB exposure in juvenile animals is vital, so that we can try to mitigate the impact of these dangerous chemicals and help protect marine mammals in UK waters.”