Molecular catalysts that mediate reactions with carbon dioxide often promote chemical reductions that form either carbon monoxide or formic acid (HCO2H), but lack the activity and selectivity to reduce these compounds further to make other useful products, such as methanol, ethanol or methane. Writing in Nature, Wu et al.1 report that a molecular catalyst immobilized on carbon nanotubes can promote the electrochemical conversion of CO2 to methanol in water. The result holds promise for advancing the search for catalysts that make highly reduced products from CO2. Such products can then be used as fuels and as feedstock chemicals for industrial processes. 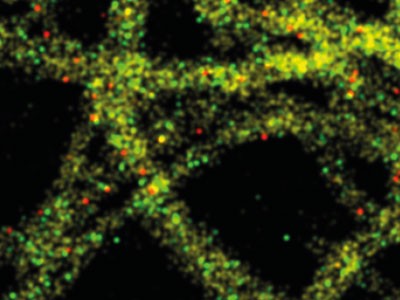 The heavy use of fossil fuels has led to excessive emissions of CO2 into the atmosphere, and poses imminent threats to our climate system. Renewable energy sources, such as solar and wind power, are green and sustainable alternatives to fossil fuels for powering our society. Unfortunately, their intermittent nature limits their widespread use. Methods for storing the energy from these sources are therefore needed, to even out the supply.

Electrically powered methods for transforming CO2 into fuels and other CO2-derived chemicals are a promising strategy for tackling some of these energy issues, with the added bonus that they might help to mitigate atmospheric CO2 levels2. But the development of such methods is by no means easy, because CO2 is a stable and relatively unreactive molecule. Catalysts are therefore essential to activate CO2 and drive its conversion into desired products.

Among the various classes of catalytic material, molecular catalysts that consist of ligand molecules bound to metal ions have certain advantages: they follow well-characterized reaction pathways, and have chemically modifiable structures that allow their activity to be tuned quite precisely. Molecular catalysts that promote the electrochemical conversion of CO2 to carbon monoxide or, in fewer cases, to formic acid (or its formate salt) have been known for decades3. Attempts to reduce these compounds further to make methanol, ethanol, methane or ethylene (CH2=CH2) have been unsuccessful — or, at best, have provided these products in small quantities with low selectivity4,5 (that is, as a small component of a mixture with other products). Copper-based materials have previously been the most successful catalysts for such reactions6.

Wu et al. now reveal that, when a complex called cobalt phthalocyanine is dispersed on carbon nanotubes, it has appreciable catalytic activity and selectivity for the electrochemical reduction of CO2 to methanol (Fig. 1). More specifically, the cobalt phthalocyanine complex must be physically adsorbed to the surface of the carbon nanotubes as individual molecules. The key finding is that this mixed catalyst system not only activates CO2 to produce carbon monoxide, but also, surprisingly, promotes further reduction to methanol when high voltages are applied in the electrochemical cell.

The researchers found that optimization of the catalytic system was difficult, because many extrinsic factors affected the activity of the molecular catalyst. These included the method used to immobilize the catalyst on the support; the specific carbon support chosen; the ratio of the concentration of the catalyst to that of the support; and the voltage used for the electrochemical reduction. The product selectivity of CO2 reductions catalysed by cobalt phthalocyanine can be strongly affected by even a subtle variation in any of these factors7. However, the optimized catalyst system has significantly improved activity and selectivity compared with previous molecular-catalyst systems. Still, it is not as good as the state-of-the-art, solid-state metallic catalysts that have been reported for methanol production8,9. 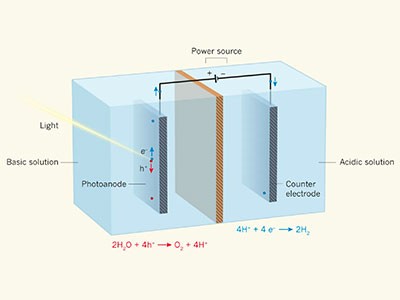 A long-standing issue associated with molecular catalysts in general is their long-term stability. Wu et al. found that their cobalt phthalocyanine system lost its catalytic activity over the course of five hours, and they identified the deactivation process as degradation of the phthalocyanine ligand. When they modified the ligand by appending amino (NH2) substituents to it, they found that their system’s stability was enhanced — it lasted for more than 12 hours, with only a slight loss of overall activity and selectivity. The reason for the stabilizing effect is not known. Note, however, that the catalyst would need to last for thousands of hours if the reduction process were to be implemented in an industrial setting.

The findings reveal that molecular catalysts have great prospects for use in CO2 transformations. Future research could focus on further improving the activity, selectivity and stability of the molecular catalyst–carbon nanotube hybrid system through judicious chemical manipulations of the catalyst and the support, and of the interactions between them. Detailed mechanistic insight into the catalytic conversion of CO2 to carbon monoxide, and further to methanol, might be gained using computational modelling and ‘operando’ characterization techniques, which monitor the consumption of reactants and the build-up of products during catalysis. Such efforts would lay the foundations not only for improving the performance of existing systems, but also for discovering new catalysts involving metal complexes, or structurally similar catalysts consisting of single metal atoms dispersed in carbon materials10.

Concerns have been raised that the generally moderate activity, selectivity and stability of molecular catalysts for CO2 reactions will prevent them from being used on an industrial scale. Moreover, the transport of CO2 in electrochemical cells that have been used in proof-of-concept experiments is limited by the low solubility of this gas in water11. However, the adoption of flow technology in which a large quantity of gaseous CO2 is fed directly to catalysts can greatly improve the outcome of CO2 transformations12. With continued efforts to improve catalyst performance and the design of electrochemical cells, the industrial production of methanol from CO2 could well be within reach.