Collectively, 20 major chemical firms upped their research spending by 3.3% in 2018. 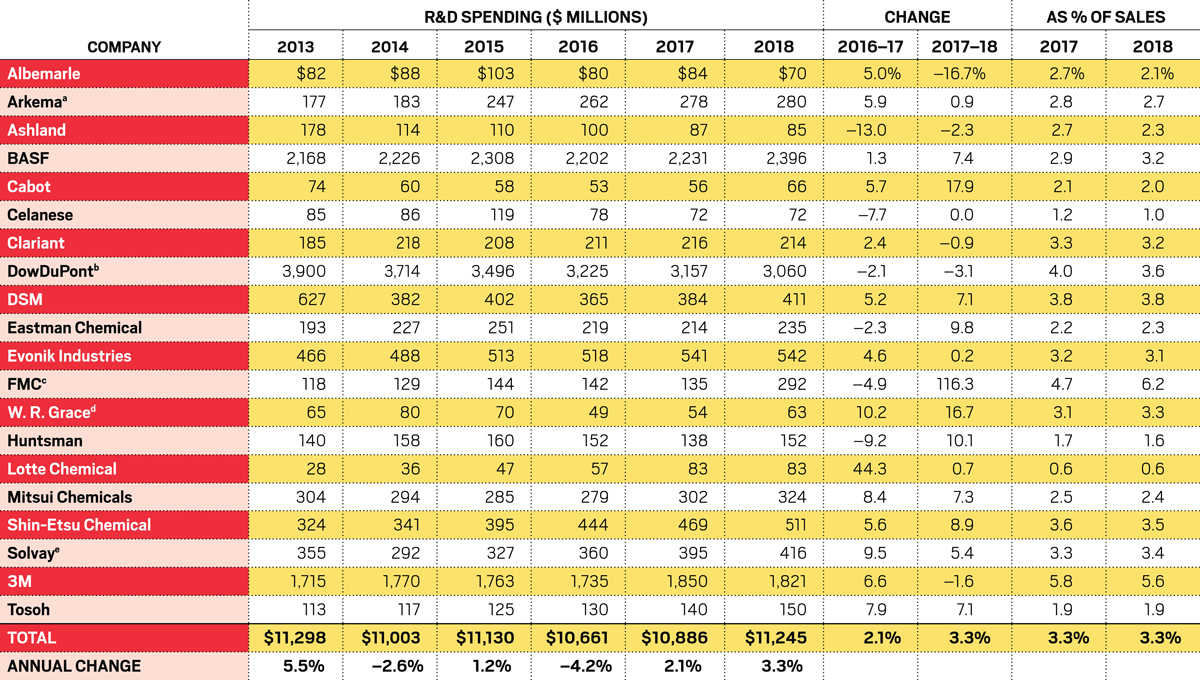 Sources: C&EN surveys. Note: Some figures were converted at relevant average exchange rates for 2018. Some company results are for the fiscal year. a Bought Bostik in 2015. b Results include Dow Chemical and DuPont, which merged on Aug. 31, 2017. C&EN combined historical data for the two firms. c Acquired DuPont’s crop chemical business in November 2017. d Spun off construction product and packaging businesses in 2016. e Bought Cytec Industries in 2015.

Inflation aside, the share of chemical company sales devoted to R&D has hovered around 3% for the past decade. Its peak was 3.6% in 2016.

These relatively low spending levels for large industrial chemical enterprises have not always been the rule. Thirty years ago, spending levels were closer to 6%. For instance, in 1986, a group of 17 US companies that C&EN tracked, including DuPont and Dow Chemical, devoted about 5.7% of sales to R&D.

Back then, C&EN surveyed only US-headquartered companies. In 2013, we added European firms to the annual accounting. This year’s survey includes four significant Asian chemical companies.

R&D spending in constant dollars last year was well below the 10-year peak in 2013, but spending as a percentage of sales was close to the 2016 peak.

Sources: C&EN surveys, White House Office of Management and Budget. Note: Values are for 19 chemical firms listed in the “Financing research” table. Excludes Lotte Chemical because 10 years of data are not available.

By adding the new companies—Lotte Chemical, Mitsui Chemicals, Shin-Etsu Chemical, and Tosoh—C&EN remedies a shortcoming in its survey and more fully recognizes the global nature of the chemical enterprise. The list of 20 firms also includes 10 US stalwarts and 6 European standard-bearers.

Another change to the survey is that two firms—Air Products and Chemicals and Praxair—are no longer included. Both focus heavily on the industrial gas sector.

The R&D table, like last year’s, presents Dow and DuPont as one company to recognize the 2017 marriage of the two firms. Next year’s table will recognize their 2019 divorce and the emergence of a third firm, Corteva Agriscience, which comprises their combined agricultural assets.

Notable too is that this year’s future-oriented spending story focuses only on R&D. We discontinued a capital-spending survey after deciding that most C&EN readers are more interested in money targeted at research that advances the chemical enterprise.

Sometimes the money for those advances comes from surprising places. Historically, FMC was a diverse chemical conglomerate with R&D spending in the mid–$100 million range. Its R&D budget jumped 116% in 2018 to $292 million, marking its transformation into a pure agricultural player after the 2017 acquisition of DuPont’s agrochemical operations.

As companies change and industries evolve in the future, C&EN will be there to capture the impact on R&D spending.